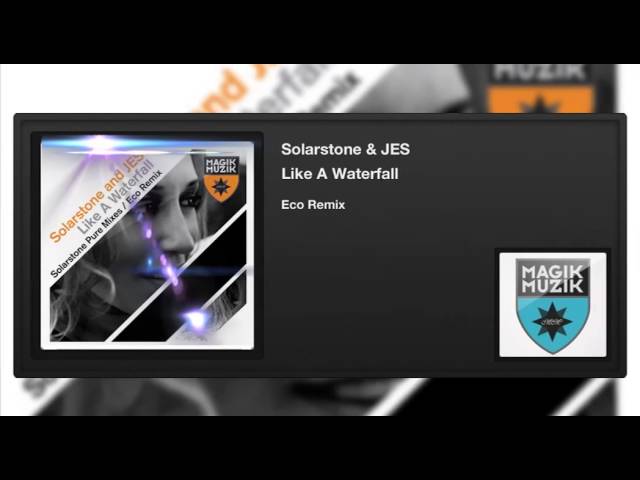 When originally released in 2006, the seminal 'Like A Waterfall' from Solarstone & JES turned heads & hearts, and became a dearly beloved 'classic' to many. Now, with his 'Pure Trance' flag flying at full mast, Solarstone has revisited & refined the track, resulting in two beautiful club mixes for the discerning trance lover. His 'Pure Mix' brings the song bang up-to-date with it's driving persistent groove, evocative melodies and precision-delivery of that rapturous chorus. For instrumental lovers Solarstone focuses on the melodic piano elements in his 'Cascading Pure Dub'. As if that were not enough, after months of tastemaker-teasing and having acquired almost mythical status, the wonderful Eco Remix finally gets a full release. This is music for life.

From scene founding father to, of-late, initiator and flag-bearer for the Pure Trance movement, Solarstone’s enduring influence spans the near length of the genre’s history. Having championed the true nature of trance music from his very first release, the last 24 months have seen Solarstone drive its sound, almost singlehandedly, back up to the top of the genre’s agenda. Through his #PureTrance gospel - modernizing the genre’s heart, whilst maintaining its soul - he captured the mood of the scene with zeitgeist timing. Solarstone’s Pure Trance concept has subsequently spun off into a mix-comp series, Pure Trance shows worldwide (including electronic music capitals like Miami, Ibiza & Amsterdam) and most recently the Pure Trance Recordings label. Solarstone has long brought his sound to some of the most famous clubs, arenas and festivals on the planet. Most recently those have included Global Gathering, Cream Ibiza, A State Of Trance and Tomorrowland in Europe, whilst further afield he’s rocked TomorrowWorld, Stereosonic, FSOE  & numerous others. With ‘RainStarsEternal’, ‘Touchstone’ and most recently ‘Pure’, he’s released a trilogy of critically acclaimed artist albums, whilst releases from Solarstone’s manifold label projects (Touchstone Recordings and Molecule among them) continue to provide the foundation blocks of his inimitable sets. Solaris International - his weekly radio show - enjoys a die-hard fan-base and is now broadcast across some 50 + FM & Internet stations. In October of 2013, off the back of the Pure Trance wave, Solarstone re-entered DJ Mag’s list of the planet’s Top 100 DJs.

JES’ extraordinary voice, passionate songwriting and legendary collaborations have cemented her place as one of the most established names in world of dance. Her new live show featuring JES’ sublime vocals combined with her DJ mixing reaffirms her longstanding commitment to revolutionizing EDM culture. The ‘Unleash The Beat’ radio mix show airs on more than 50 radio stations all over the globe every week.