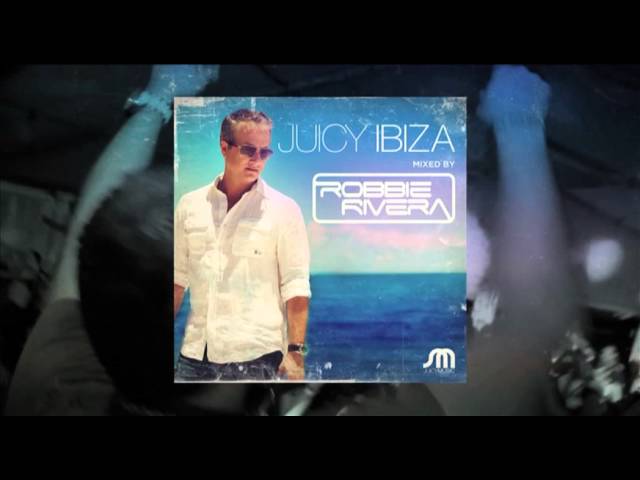 For the seventh year in succession, Robbie Rivera releases a brand new edition in his celebrated mixcompilation series "Juicy Ibiza". Professionally capturing the one of a kind Balearic ambience of the White Island, DJ/Producer Robbie Rivera takes you on a trip with two continuously mixed discs. Featuring the most recent floorfillers and remixes that currently dominate the season, "Juicy Ibiza" will continue to sparkle long after your sunny beach holidays are over.

Handpicked and mixed by Robbie Rivera himself -still the driving force behind the famous Juicy Beach parties and 'tuff, sexy house music'- Juicy Ibiza secures the cream of the crop of the Ibizan season. The track list of both discs offers a massive set of brand new singles and remixes by Nathan Scott & Alex Delgado, Atomic Bangers, Tony Arzadon featuring Tank, Tiësto featuring BT, Phunk Investigation and of course a hot selection of original Robbie Rivera productions and collaborations with established names like Dero, Federico Scavo, David Jones and many, many more.

"Juicy Ibiza" mixed by Robbie Rivera is the essential mixcompilation for this summer and provides a stunning flashback to lush pool parties, ice cold cocktails, a cool breeze and the absolute best electronic dance music in the industry.

Robbie Rivera was nominated as "Best Producer" by the 2004 Dancestar Awards, followed by “Best House Producer” by Beatport, and “Best Remixer” by the International Dance Music Awards in 2008. In 2009, Rivera released the fourth Juicy Ibiza compilation and the release hit the Top 5 in iTunes sales globally. His artist album "Closer To The Sun" garnered critical praise and a great deal of media attention around the globe with hit singles including “Closer To The Sun,” “Let Me Sip My Drink” feat. Fast Eddie, “Rock The Disco” and “We Live For The Music”. His latest album "Dance or Die" hit the streets in May 2012 and harvested the hits "In The Morning", "All We Are", "Makes Me Feel Good" and "Forever Young". His Juicy singles "Jump", "Cats and Dogs" and "Legend of the Drums blow up the charts all over the world.