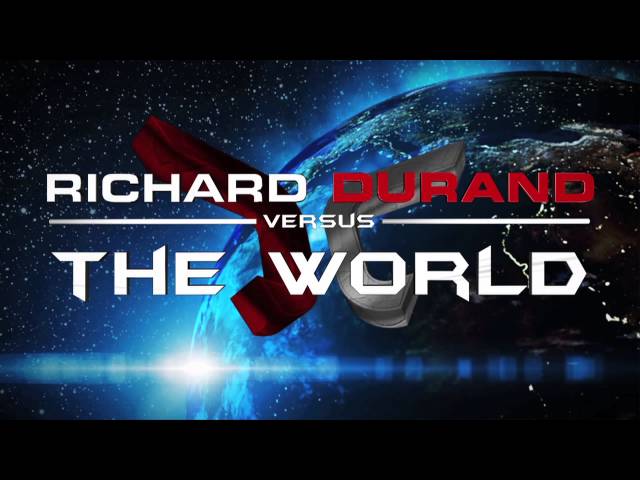 14 months, 15 productions, bridging all 5 continents, powered by 1 imagination-capturing concept and 1 what-dreams-are-made-of contest - ‘Versus The World’ has been a bona fide production odyssey. The project has seen internationally renowned musician Richard Durand produce his way to the ends of the earth, working with regional EDM like-minds including Paul Oakenfold, Bobina, tyDi, Heatbeat and Protoculture.

Off the back of its boundary breaking regional ‘Richard Durand Versus The World’ contests, he’s uncovered a new producer class, pulling off one sensational pro-am co-production after another. Now the whole globe-spanning travelogue is brought together to create the finished article. This is ‘Versus The World’… The Album!

Preparing to orbit the Earth at the speed of sound, ‘Versus The World’ embarks on its journey with a salvo of Durand’s solo material. Personifying Richard’s characteristic tech-ish appeal, ‘Chopstick’ and ‘Sequence’ deliver adrenaline shot beats and hard-fired percussion loops, packing them against those tense, stormy Durand riffs. On ‘Stand Again’ Leah’s vocal cadence generates the uplift, while Richard’s production travels the track into distorted atomic big-room-boom territory. Packing a peak-time punch, ‘Trancefusion’ (which served as the anthem for the Prague-based event of the same name) unleashes a euphoric trance fireball onto the floor!

Where would a superhero be without his trusty sidekick? At each of its continent-hopping stop-offs, Richard sought out and found a new production talent to introduce to the world. Through the 5 widely publicized regional contests, greenhorn studio jockeys accepted the challenge and were given their first chance to shine. Fighting the good fight alongside Richard are the likes of Huge Euge with the synth strafing euphorica of ‘Signs’, the melodic vistas of ‘Vega’ (in tandem with The Progressive Brothers) and the rapacious, club-shaking ‘Free Fall’ co-produced with Stefan Vijoen.

“This year has been about finding tomorrow’s EDM heroes today” says Richard. “Through both this album’s regional contests and the ‘mix a disc for In Search of Sunrise: 10’, I think we’ve introduced some real talent. I hope these prove to be their first steps on the journey to EDM greatness! Time will tell!”

What’s the only thing better than one superhero…? That’d be two superheroes together! Before departing on his Versus The World mission, Richard assembled a league of fellow EDM avengers, to help exact dance justice on club floors! ‘R.D.V.T.W.’s mercury continues to skyrocket through heat-seeking tracks like ‘Loose Unit’ and the wickedly infective ‘Crashed’ (produced respectively alongside Australia’s own tyDi and all-out legend Paul Oakenfold). Elsewhere ‘Pleasure’ and ‘Devils Inside’ (with recent DJ Mag poll debutantes Protoculture and Heatbeat) and ‘Last Train To Moscow’ with Bobina ensure its temperature remains nothing short of volcanic!

“As I fly around the planet I meet a lot of other DJ/producers and we very often end up discussing production collaborations. ‘Richard Durand Versus The World’ is where the talking stopped and the music began! It was among the most satisfying aspects of this album to be able to work with some of my personal favourites in their studios, dotted around the world. The results are tracks that travel in musical directions that otherwise I might have not. For a producer that’s a very rewarding thing to realise.”

‘Richard Durand Versus The World’ is among one of the boldest, most imaginative artist long-players ever sent into the EDM realm. A visionary concept that simply refuses to be just another collection of artist’s tracks, it goes on general release November 5.