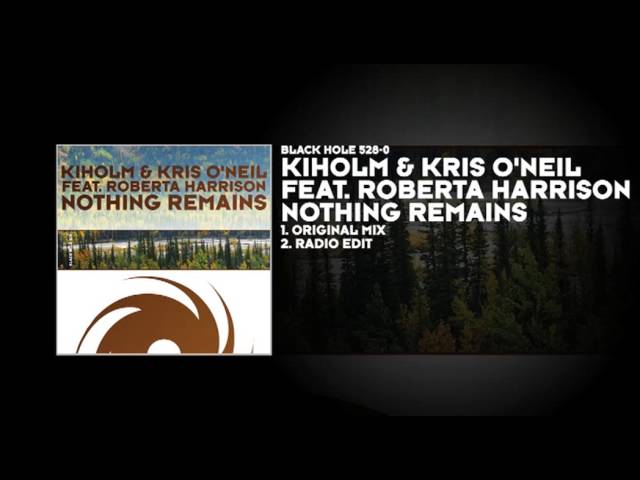 Kiholm and Kris O’Neil join forces with Roberta Harrison for their new single “Nothing Remains”, released on Black Hole.

Kiholm was formed in 2007 by DJ and producer Mads Kiholm. Ever since his debut “Check Out”, he has clocked up an impressive array of remixes and original tracks like"Fragile", which was voted in the top 20 of the best tunes of 2008 on “Trance Around the World” with Above & Beyond and championed by the likes of Armin van Buuren and Ferry Corsten. "Panacea" got airplay from no other than Armin van Buuren on his “A State of Trance” radio show and was featured several times on BBC Radio 1 hosted by Judge Jules. Kiholm's style eventually turned into a fusion of trance, house and techno. The result was “We Just Did”, which was also a collaboration together with fellow Dane Kris O’Neil.

Kris O’Neil (born in Holbæk, Denmark, 1986) started his DJ career at age 15 as a direct result of his successful program called “In Da Mix” which he hosted on a local radio station. While being complimented by promoters worldwide for his unique style in electronic dance music, his singles "Paid My Douche", "Those Mornings", “No Porn Intended” (with JPL) or "Swingersclub" (with Niklas Harding) skyrocketed, just like his remixes of “Closer” by JES, “Promises” by Andain and “What You Want” by Daniel Wanrooy ft. Melissa Mathes. Kris is also known from his efforts for the “In Trance We Trust, Volume 19” mix compilation.

When asked about the single in a recent interview, Kiholm said: “This really is a tasty collaboration with Kris O’Neil. We managed to get Roberta Harrison on it for the vocal part, who was a big inspiration for me when I started producing back in the days.” And the two producers definitely show what that big inspiration had in store for this new single: a massive vocal trance smash that features all the ingredients of a superb, instant classic!