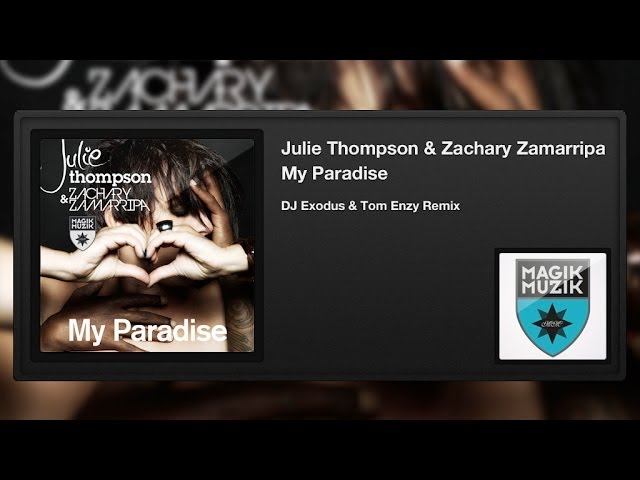 The result of the collaboration between Julie Thompson and Zachary Zamarripa is ‘My Paradise’ a real treat for your ears with it’s unique sound and Julie’s beautiful vocals. A remix package is now released with remixes by DJ Exodus & Tom Enzy and Jaco & Ease. Both remixes are complete bangers, each in their own genre.

Julie Thompson, a British vocalist and singer songwriter, has also paid her dues in the EDM scene, writing with James Holden, Andy Duguid, Alan Bremner, the Freestylers and Tiësto with whom she collaborated on his ‘Elements of Life’ and ‘In Search Of Sunrise 6’ albums. Julie has also released a solo album called ‘Feeling For Corners’ and her own tracks and collaborations are featured on uncountable albums and compilations.

The career of DJ/Producer Zachary Zamarripa had it’s first break when his song ‘Tempting Faith’ was featured on Markus Schulz January Top 15 early 2010. With the release of his EP with the tracks ‘Sassafras’ and ‘Lies in Wait’ on Black Hole Recordings his sound started to became more geared towards clubs and his tracks received support from many artists. Same with his more recent releases. With his drive and passion for music, Zachary Zamarripa will definitely continue to make a name for himself in electronic dance music.