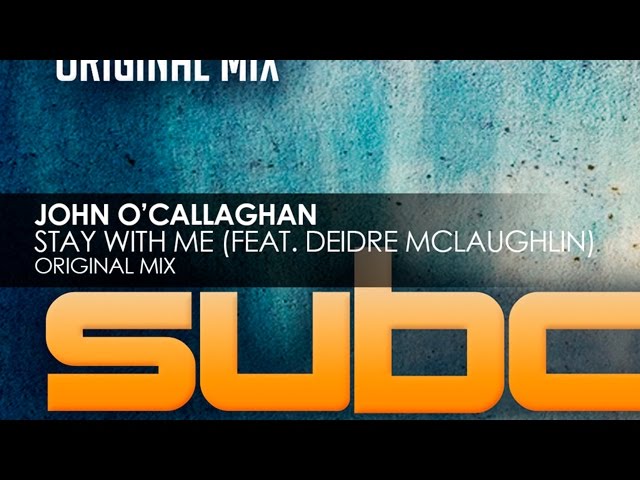 You won’t find a more capable pair of studio hands for the vocals of Irish singers than John O’Callaghan’s.
The last few years alone have seen the Gaelic tones of Kathryn Gallagher, Erica Curran, Karen Kelly and (perhaps most famously on Big Skies) Audrey Gallagher translate into a string of high-yield club anthems.

With his first single of 2015, that arc extends a step further, as he welcomes another Irish songstress to the Subculture fold. Between Deirdre McLaughlin’s vocal immersion and John’s own (much-celebrated) brand of galvanised production, Stay With Me’s ready to deliver equal measures of emotion and elevation!

With instrumentals like One Special Particle, The Saw and Caves, John’s studio output tore up club floor tiles just as hard as ever in 2014. Stay With Me though sees him re-enter the vocal trance realm.

No stranger to that world herself, Deirdre McLaughlin’s previously brought vocal enrichment to tracks by Orla Feeney, Full Tilt and others. Chapter, verse (and chorus), her seraphim song injects John’s latest with a new level of lyrical & vocal poignancy. Set again his moving chord & pad driven melodies, and latterly the synth-surge of the break, Stay With Me achieves peak-time attitude… and altitude!

Bottom line: you owe your earholes some of this! Stay With Me’s available from today.