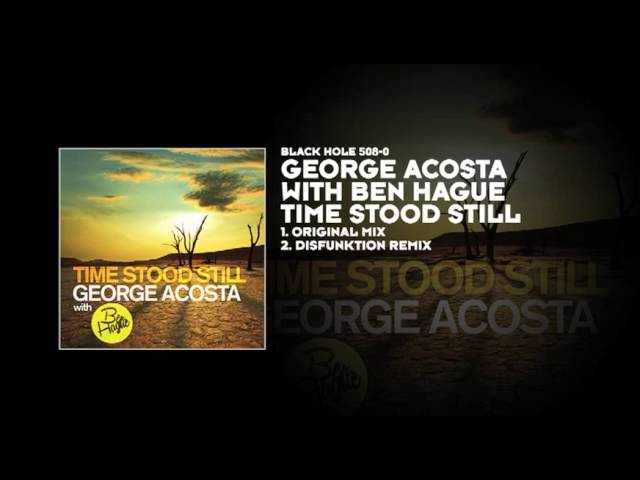 George Acosta finished his massive "Lost World 2" mix compilation only weeks ago and already the self proclaimed workaholic is back with a brand new vocal trance smash. Taking his track to the stage with vocalist and singer/songwriter Ben Hague, George proudly presents "Time Stood Still".

George's career of more than 20 years in the industry reads like a book. Born in Cuba and a long-time resident of Miami, the man established his name with the mega-selling 1996 hit "Set You Free", won the award of "America’s Best DJ” in 2007 and became member of the ‘Remix and Producer’s Grammy Committee’. Signed to Black Hole, Acosta scored big time with “Beautiful”, “Love Rain Down On Me”, “True Love” and “Tearing Me Apart”; all featuring his muse, Fisher. This time George engaged Ben Hague for the vocal part of "Time Stood Still". Ben Hague, as many will know, entered the scene with a bang after his collaboration with Ferry Corsten for the single “Ain’t No Stoppin’ A Good Thing”, which was followed up later that year with the heartbreaking floor filler with Beat Service “Why Me?”.

Every aspect of "Time Stood Still" breathes the hot, summer breezy style of electronic dance music that defines the outdoor atmosphere of everything between a vast festival performance and an impromptu, intimate private pool party. Ben Hague's crystal clear vocals will have everyone sing along and for the more techy gatherings, George added the slightly rougher Disfunktion Remix.