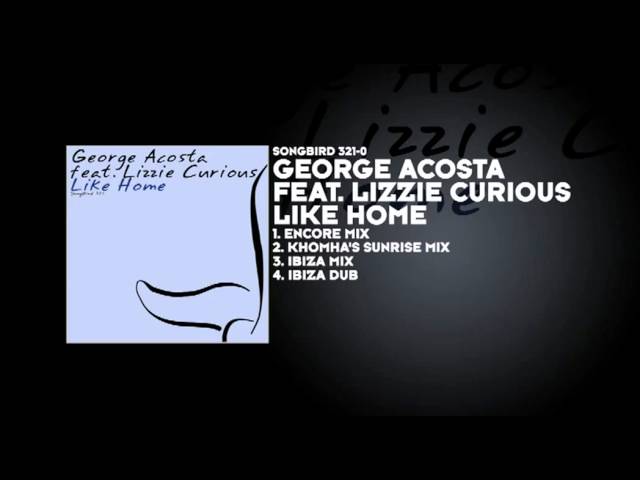 George Acosta presents his new single “Like Home” on the Songbird imprint, with the touching vocals os Lizzie Curious.

Miami based DJ/Producer George Acosta has been active in the industry for more than 20 years. As the founder of his own Waxhead Records label, he remixed countless artists from the B52s to Ultra Nate to Jon Secada and released seminal mix compilations like “Miami Beach Bash” and “Trance Nation America”. In 2007 he became America’s Best DJ, received a Grammy nomination for a remix he did for Fabulous and became member of the ‘Remix and Producer’s Grammy Committee’. Early 2010, George Acosta signed with Black Hole Recordings and recorded the mix compilation “From Miami To Amsterdam” and made the artist album "Visions Behind Expressions", which harvested the singles “Beautiful”, “Love Rain Down On Me”, “True Love” and “Tearing Me Apart”. George is currently working on a new artist album, due for release on a still to determined later date.

“Like Home” is George’s follow up to his recent single “To The Sky”. With this new single George is probably the first this year to add an Ibiza Mix and Dub to the single package, clearly stating what “Like Home” stands for. Pure energy packed in skillfully produced trance with some minor tech trance influences, but with the superb vocals by Lizzie Curious to top things off perfectly for the dance floors.