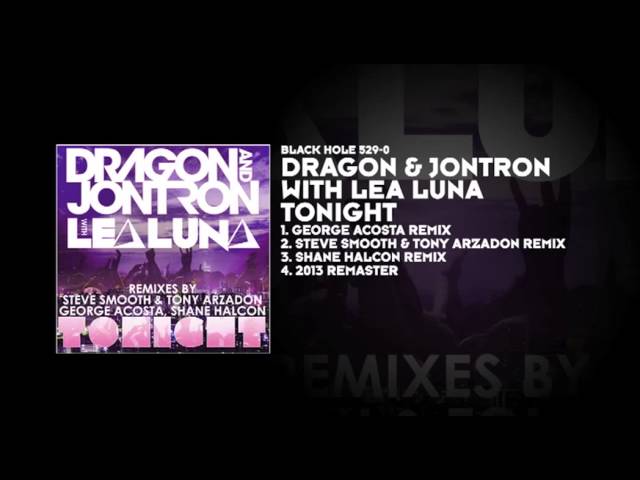 Dragon & Jontron present a brand new remix package of their hit single “Tonight” on the Black Hole imprint. The vocals are peformed by Lea Luna.

Dragon and Jontron teamed up in 2010 and it hasn’t taken them long to make a splash in the dance music world. The two are responsible for prolific remixes for some of the most respected artists in the scene including such heavy weights as Tiesto, Kaskade, BT, Jes, Afrojack, La Roux and many others. As artists they not only made name as prolific producers, but also as professional DJs: both are residents of Beta Nightclub in Denver, the #1 club in North America. Playing a combination of progressive, electro and the special Dragon & Jontron sound, they’ve managed to successfully fuse their talents in the studio and debuted their sound for the Avanti imprint with their first  single “Sriracha”. Now the boys bring us their excellent follow up entitled “Tonight”.

“Tonight” features the vocals of the great Lea Luna. In an industry of one-trick ponies, Lea Luna has it all: Looks that kill, a dedicated underground following, extensive skills with the tools of the trade, and, last but not least, timing. In response to electronic dance music (EDM)'s recent presence under the mainstream spotlight, pop music artists incorporate the beats and progressions popularized by the former genre into their productions now more than ever. Such trends invariably backfire, however, when purist fans of the producers from which pop artists borrow their sound challenge their street cred in any kind of open forum. Luna's career, on the other hand, resonates with the long-time supporters of the EDM community as she's been creating music within the genre for much longer than she's been a pop singer. Lea Luna recently performed on the Manufactured Superstars hit single "Drunk Text".

Dragon and Jontron delivered a massive party track with “Tonight” last year. Creating the perfect balance between tightly produced house with a hint of tech trance and driving sweeps, the two producers laid a powerful landing strip for Lea Luna’s enticing vocals and rocked dance floors all across the world. The massive remixes from George Acosta, Steve Smooth & Tony Arzadon and Shane Halcon have prepared “Tonight” for this upcoming season’s events and festivals; DJs beware for this bomb shell smash!