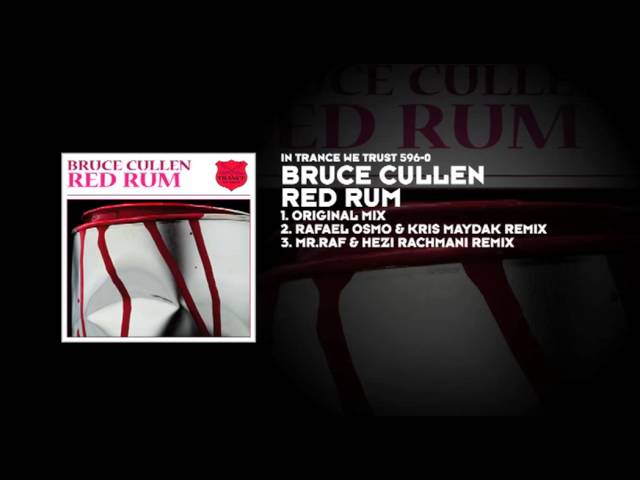 Bruce Cullen entered the In Trance We Trust stage last year with his debut single “Princess Bay” and immediately caught the attention of the big names in the industry. With "Red Rum" Bruce delivers the outstanding follow up plus a set of magnificent remixes.

Bruce Cullen has been directly involved with the electronic dance music industry for more than twenty years, throwing his own events such as NeXT, bringing in top talent such as Sied van Riel, JOOP, Emma Hewitt, Ronald van Gelderen and many others to the dance floors of the United States. Bruce has performed at the Loveparade and has a background in Hollywood, appearing on Days of Our lives, in music videos with Phil Collins, David Bowie and shows like Melrose Place and Beverly Hills 90210. He is also a music producer and has plans to work directly with the motion picture industry. The 2012 release "Princess Bay" was Bruces' debut for the In Trance We Trust imprint.

For some movie enthusiasts, "Red Rum" may refer to a scene from the classic movie "The Shining", but for the professional DJs amongst us, "Red Rum" is a killer track for their live performances. Bruce composed a track that stays close to the well known In Search of Sunrise sound and draws an immense soundscape for the experienced EDM fans. An undeniably progressive combo of beat programming and sub bass provides air to light but still towering synths, a superb break and a theme that will stay with you for the rest of the day. DJs should also listen closely to the remixes by Rafael Osmo & Kris Maydak and Mr. Raf & Hezi Rachmani.