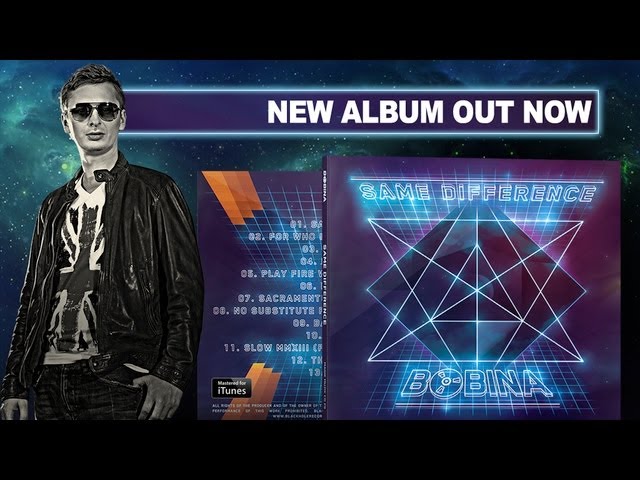 Two years ago, with ‘Rocket Ride’, his third artist album, electronic music cosmonaut Bobina shot his sound space-bound… Now, in the year 2013, the Russian Grand Master returns to deliver what he terms “a continuation album” and “a sequel in all but name”. Drawing on a spacious range of influences, styles and inspirations - both pre-and-post millennial - ‘Same Difference’ beams its epic sonics out from the heavens. With a dance planet firmly in its crosshairs, and an accomplished vocal and co-production crew on board (Susana, Betsie Larkin, Ana Criado and Andrew Rayel among them), Bobina’s pan-galactic, retro-futuristic EDMission continues…

Intergalactic…. ‘Same Difference’s journey begins in a sea of trance tranquillity with its title track. Casting a knowing, timely glance in the direction of Isla Baleares, its subtly thrummed 70s guitar-ism twinned with its Med-trance wrap, cede to a once-heard/never-forgotten drop. Throwing the album into warp-drive, ‘Sacramentum’ finds Bobina studio-side with Moldova’s Andew Rayel. A euphoric Ying to the harmonic Yang of ‘Rocket Ride’ fan-fave ‘Lamento Sentimental’, its pianoforte symphonica, choral vocal midsection and ebullient conclusion set the album ablaze.

Other dimensions… Further in, audio like ‘Quattro 372’ and ‘Miami Echoes’ orbits further around the electronic music sphere, building House, Progressive House and occasional electro elements into the album. Putting the ‘stellar’ in interstellar, ‘The Space Track’ furiously grinds and distorts, stabbing its tech keys, while Bobina’s runs the mod-wheel hard to secure its climactic chain reaction moment.
………
“As my career has progressed, vocals in my music have become more and more key. In the studio the human voice is now every bit as inspiring to me as the synthesizer. I think on ‘Same Difference’ they’ve been used as never before.” - Bobina

Farsighted vocals… For the album Bobina has engaged the talents of some of electronic music’s hottest singers and most creative, authentic lyricists. On ‘For Who I Am’, Ana Criado’s cut-to-the-quick song drips an aching expressionism into the track, while Dmitry underlays the Dutch doyen’s vox with a complex production nature. Laying down the law, ‘Play Fire With Fire’ has Susana drawing a (lyrical) line in the sand. As the first dubstep tremors shake its production, you can be certain its earthquake moment isn’t far behind. Taking the production partnership that started with ‘You Belong To Me’ to the next level, Bobina & Betsie Larkin reteam on ‘No Substitute For You’. With her ethereally calling vocal reflexion bringing its beauty, Dmitry side-chains the hell out of the drums, hammers the uplift button hard and unchains the track’s inner beast!

Of his objectives for his fourth long-player, Bobina says: “without being a sequel in name, this is very much the natural second chapter to ‘Rocket Ride’. Same difference maybe, but is a continuance that shares the same spirit, and often the same styles as my last album. It is also about the continued pursuit of artistic freedom-of-movement; I see this only as an ‘electronic music album’ - plain, straight + simply that!”

Dancing in outer space… A big club moment is never far away on ‘Same Difference’. Daisy-chaining floor ferocity, tracks like ‘Diamond Hell’, ‘Basque The Dog’ (idiosyncratically based on the melody from ‘Hound of the Baskervilles’ by Russian composer Vladimir Sergeevich Dashkevich) and ‘Sober Duck’ all take zero prisoners. Dealing out high-velocity militaristic drums & percs, darker-hearted frequencies, and serrated synths fortified by hazardous levels of distortion, they carve up the floor. As ‘Lovin’ Lies’ brings the album to its gravity-defying coda, Bobina signs off on his most accomplished album to date. You can explore its outer reaches from June 17th