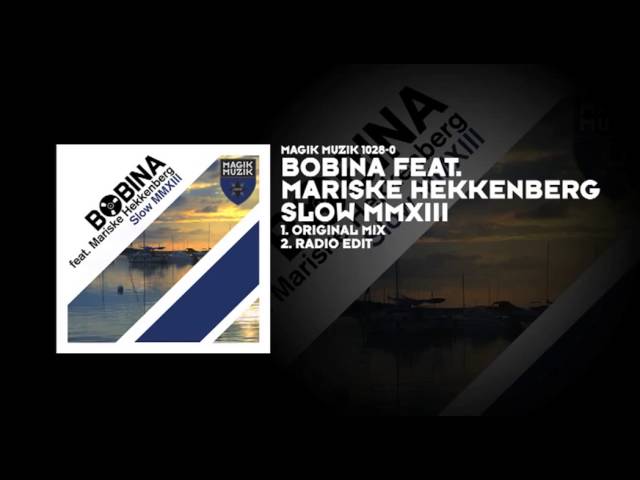 Bobina presents his new single “Slow MMXIII” on the Magik Muzik imprint, working together with Mariske Hekkenberg for the vocals.

Bobina a.k.a. Dmitry Almazov, one of only a few deck-practitioners to once be handpicked by Tiësto to support him on his "In Concert" tour, began his career in 2003. He was the first Russian DJ to appear in the DJ Mag Top 100 chart. Bobina has subsequently remixed artists such as The Thrillseekers Supermode (Axwell & Steve Angello), Armin van Buuren and Paul Oakenfold. He was also the helmsman of the 17th volume of the famous In Trance We Trust mix compilation series. After the success of "Quattro 372", Bobina released "The Space Track" and “You Belong To Me”, a production that he also made with Betsie Larkin. “No Substitute For You” was their second collaboration and this time Bobina joins forces with the lovely Mariske Hekkenberg.

The multitalented Dutch female vocalist Mariske Hekkenberg has a long family history in music and picked up the microphone herself at age 15. She performed in various bands, participated in the Dutch National Songfestival of 2000 and embarked on a European tour in 2002 with the world famous Glenn Miller Orchestra, performing in Berlin, Vienna, Sicily, Moscow and St Petersburg. In november 2012 she featured as the backing vocalist for Todd Rungren together with Mathilde Santing. Enter 2013 and Mariske now shows her versatility on Bobina's new floorfiller "Slow MMXIII".

With "Slow MMXIII", Bobina gives the tech trance DJs the perfect tool for a killer climax in their live set. Building up the pressure with a high calibre theme, it's especially the synth line that keeps driving the people on the dance floor. "Slow MMXIII" is a true powerhouse party track and with Mariske Hekkenberg's vocals on top, we're talking chart topper here.