Bobina & Betsie Larkin - No Substitute for You [Remixes] 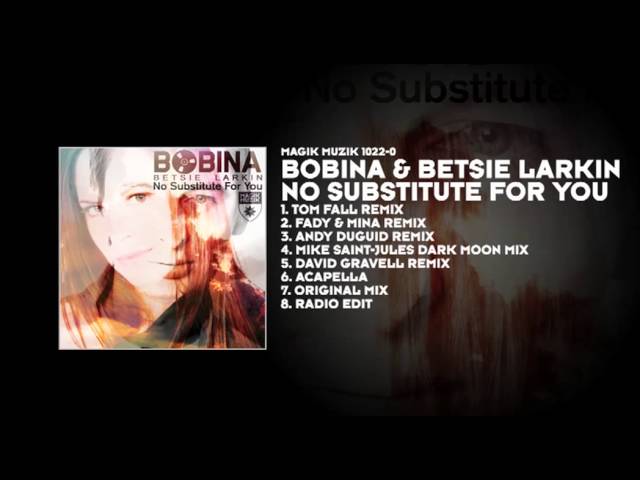 Returning to his 2012 release of “No Substitute For You” featuring the vocals of Betsie Larkin, Bobina unleashes an expanded package of the single, including remixes by Andy Duguid, Tom Fall, Mike Saint-Jules and others.

Bobina a.k.a. Dmitry Almazov, one of only a few deck-practitioners to once be handpicked by Tiësto to support him on his "In Concert" tour, began his career in 2003. He was the first Russian DJ to appear in the DJ Mag Top 100 chart. Bobina has subsequently remixed artists such as The Thrillseekers Supermode (Axwell & Steve Angello), Armin van Buuren and Paul Oakenfold. He was also the helmsman of the 17th volume of the famous In Trance We Trust mix compilation series. After the success of "Quattro 372", Bobina released "The Space Track" and “You Belong To Me”, a production that he also made with Betsie Larkin. “No Substitute For You” is their second collaboration.

Never settling for formulaic vocal trance, Betsie continues to push boundaries. Breaking onto the EDM scene in 2008 with the instant hit “Made of Love” with Ferry Corsten, Betsie has since had an impressive list of collaborations with artists like ATB, Andy Moor, Gabriel & Dresden and many others. “Obvious” with Lange was her last installment, preceded by "The Offering" with Sied van Riel. Once gain teaming up with Bobina for “No Substitute For You”, the New York based female vocalist once again shows her versatility.

The original version of “No Substitute For You”, a heartfelt and energetic vocal trance smash that was the perfect follow up to “You Belong To Me”, has been played to the hilt by nearly every top DJ in the field. The combination of Bobina’s high energy sound with big room and tech influences drew the attention from countless producers whose fingers itched to add their own twist to the song. The end result features in this single package, remixes that will all dominate events the entire season!